The USSR, emerging from several major defeats in the mid-1970s, was back on top of the hockey world going into the 1980 Games at Lake Placid. The previous year, the national team had crushed the NHL All Stars 6-0 in the deciding game of a challenge series. The Soviet domination of the 1979 World Championship was absolute. The veterans – Boris Mikhailov, Valeri Kharlamov, Alexander Maltsev, Vladimir Petrov – were still in peak form, while exciting young players like Sergei Makarov and Vladimir Krutov brought a new, fearsome edge. Behind them, as always, was the great Vladislav Tretiak in net.

The romantic notion that a bunch of college scrubs felled the world’s greatest team through sheer pluck and determination is misguided. Brooks spent a year-and-a-half nurturing the team. He held numerous tryout camps, which included psychological testing, before selecting a roster from several hundred prospects. The team then spent four months playing a grinding schedule of exhibition games across Europe and North America. The players included Neal Broten, Dave Christian, Mark Johnson, Ken Morrow and Mike Ramsey, who would go on to impressive NHL careers. There was no matching the Europeans in skill. So Brooks emphasized speed, conditioning and discipline. Knowing how luck plays a large role in short tournaments, he wanted a team that could grab whatever opportunities came its way.

Regional and college rivalries ran high among the players, most of whom hailed from Minnesota or Massachusetts. Brooks worked to unite them, often against himself. He challenged them physically, but also verbally, questioning whether they were good enough, tough enough, worthy of the task. A few confrontations ended in shouting matches. “He messed with our minds at every opportunity,” said Ramsey. “If Herb came into my house today, it would still be uncomfortable,” added captain Mike Eruzione, years later.

Brooks’ tactical moves must also be credited. Shortly before the Olympics, seeing the need for more mobility on the blue line, he asked Dave Christian to switch from forward to defense. His quest for speed produced a trio of centers – Broten, Johnson, Mark Pavelich – that could skate with anyone. By luck or design, he managed to get goaltender Jim Craig to peak at exactly the right time. The Americans were underdogs, but they were competitive. Brooks suggested that a bronze medal was within reach. Then came a pre-Olympic exhibition game against the Soviets. The wide-eyed Americans were manhandled 10-3. Brooks blamed himself, saying his game plan was too conservative. At Lake Placid, Team USA began tentatively against Sweden, but a last-minute goal by Bill Baker salvaged a 2-2 tie. A 7-3 win over Czechoslovakia boosted confidence.

The momentum grew with victories against Norway and Romania and a 4-2 comeback win over Germany. The Soviets went undefeated in their group, of course, although they fell behind against Finland and Canada before rallying late to win each game. Such stumbles appeared little cause for concern. The group standings set up the scenario the Americans had been hoping to avoid: their first opponent in the medal round was the USSR. While most recollections focus on the scoring heroics of Eruzione and Johnson, the American triumph would not have been possible without Craig.

The Soviets came out flying, out-shooting the Americans by wide margin. The goalie kept his team in the game, down 2-1 as the first period drew to a close. His teammates were more aggressive than in the exhibition game, forechecking harder. But it seemed only a matter of time before the Soviets added to their lead. The first sign of an upset in the making came at the end of the first period.

With time running out, Dave Christian took a long shot. Tretiak stopped it easily, but kicked out a rebound. The Soviet defensemen, expecting the buzzer, seemed to let up on the play. Johnson crashed between them and scored. As officials discussed whether Johnson’s shot had beaten the buzzer, the Soviets went to their locker room for the intermission. Once the goal was confirmed, they were called back for a faceoff to tick away the final second. They returned without Tretiak. The world’s best goaltender had been replaced by backup Vladimir Myshkin.

The Americans had faced the Soviet assault for 20 minutes and come away on even terms. They had also chased a legend from the net. Years later, when they were NHL teammates, Johnson asked Soviet defenseman Slava Fetisov why coach Viktor Tikhonov had shown. ~~ “Coach crazy,” replied Fetisov. “I don’t think I should have been replaced in that game,” Tretiak wrote in his autobiography. “I had made so many mistakes already, I was confident my play would only improve. (Myshkin) is an excellent goalie, but he wasn’t prepared for the struggle, he wasn’t ‘tuned in’ to the Americans.” Tikhonov later suggested the change was made under pressure from Soviet officials at the game.

The Soviets regrouped, and were even more dominant in the second period. The Americans managed just two shots on goal, while Craig fended off waves of attackers before Alexander Maltsev scored on a breakaway. The Soviets, having carried the play for two periods, had only a 3-2 lead to show for it. In the final 20 minutes, a pillar of the Brooks strategy – speed – came to the fore. Tikhonov relied heavily on veterans like Kharlamov and Mikhailov, players the Americans could catch. “Dave Silk remembers looking across the faceoff circle, hoping the face he saw would not be that of a Krutov, the player the Americans feared most, or Makarov,” writes Lawrence Martin in The Red Machine. “In the third period, his wish was continuously being granted. He would see the veteran Mikhailov, and Silk knew he could skate past him.”

The Americans pulled even on a power play goal, Johnson firing home a loose puck fumbled by a Soviet defenseman. Another defensive mistake created the history-making moment: Vasily Pervukin’s clearing pass was stopped by Pavelich. Eruzione scooped it up, skating into the high slot and throwing a 25-foot wrist shot past the screened Myshkin. USA 4 – USSR 3. But 10 minutes remained. Leaving younger, fresher players on the bench, Tikhonov trusted his veterans. Brooks rolled four lines in quick shifts, taking advantage of tired Soviet legs. “It was the first time I ever saw the Soviets panic,” said Craig. “They were just throwing the puck forward, hoping somebody would be there.”

As the Soviets mounted a final charge, broadcaster Al Michaels delivered the most famous call in American sport: "Eleven seconds. You got ten seconds, the countdown going on right now. Five seconds left in the game! Do you believe in miracles? Yes!" The building erupted and Craig was mobbed by his teammates. The Soviets waited quietly. Then the teams shook hands, the losers offering their congratulations, even smiling. Later, when Johnson and Eric Strobel were selected for urinanlysis, they met Kharlamov and Mikhailov in the waiting room. “Nice game,” said Mikhailov.

That dramatic win is what most people recall as the “Miracle on Ice.” But two games remained in the tournament. If the Americans lost against Finland and the Soviets defeated Sweden, the USSR would be gold medalists again. Team USA’s upset of the champions would go down as a curious footnote, nothing more. “There was incredible apprehension before this game,” said backup goalie Steve Janaszak. “We were horrified by the thought that we'd be sitting around 10 years later and wondering how we could lose the gold medal after coming so close.”

Brooks, fearing an emotional letdown, ran a hard practice the day before the game, taunting his players: “You’re too young. You can’t win this.” With millions of new American hockey fans watching, it appeared his concern was well-founded. Finland, a solid team, built a 2-1 lead after two periods. Before their final 20 minutes together, the coach warned his players: “This will haunt you the rest of your lives.” The team responded with another excellent finish. Goals by Phil Verchota, Rob McClanahan and Johnson sealed the gold medal. In the pandemonium that followed, with Mike Eruzione calling his teammates to join him on the medal podium, American hockey found its defining moment. “This impossible dream comes true!" cried Michaels, in a less memorable broadcast line. He captured it better during the medal ceremony: “No scriptwriter would ever dare.” 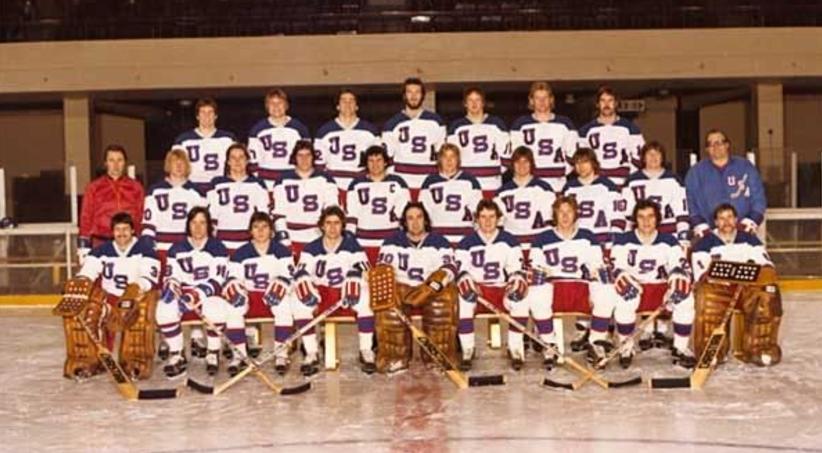 Made of heavy game weight mesh this is the only authentic copy of this jersey ever made. Other versions have the wrong striping, the wrong shoulder construction, the wrong USA letter font

and has the letters sewn in the wrong configuration. Ours is done correctly because although the original manufacturer, Norcon, has been out of business for a long time, our maker of this jersey

was in partnership with Norcon and is recreating this classic to original specifications using the same fabrics. 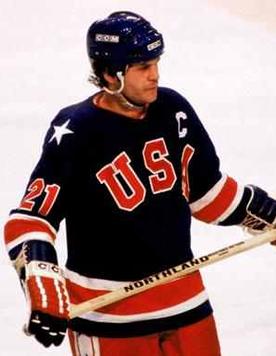 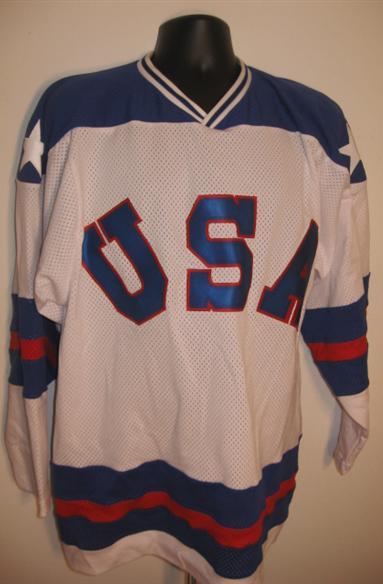 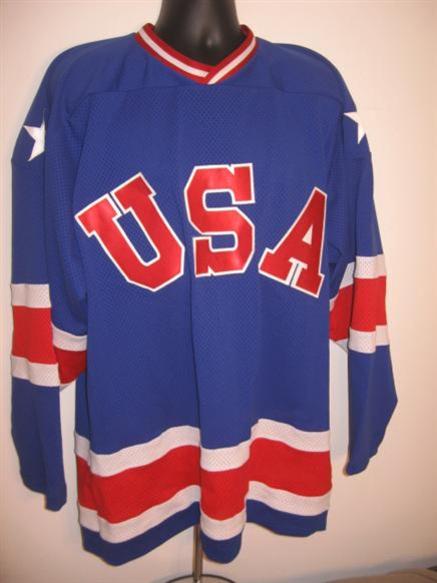 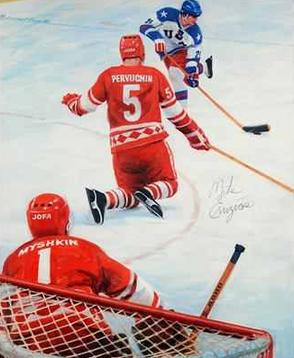 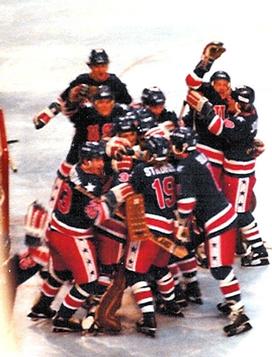