logo which has been hand sewn onto the garment, just like the original game jersey. This jersey is available in either road green or home white. 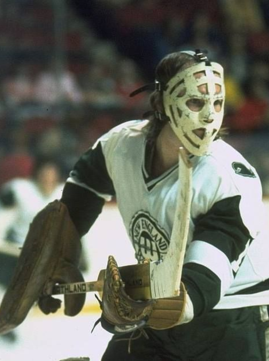 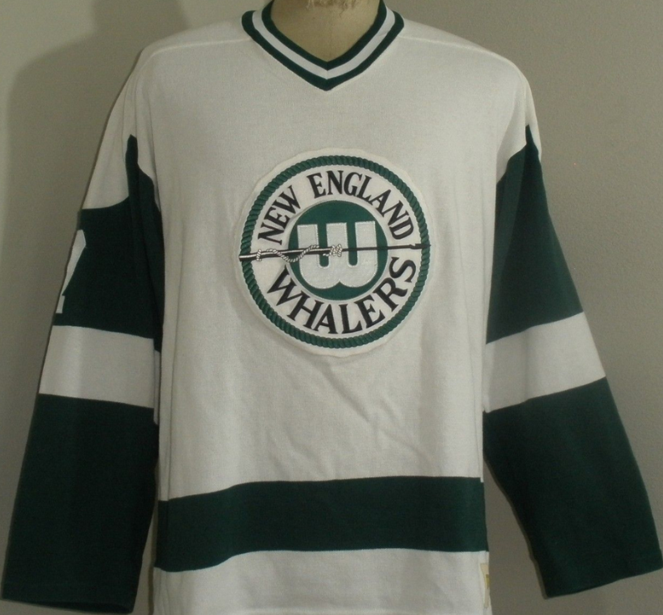 New England also signed an unusually large number of American players including Massachusetts natives and former US Olympic hockey team members Larry Pleau (who had been a regular with the Montreal Canadiens the previous season), Kevin Ahearn, John Cunniff and Paul Hurley. Two other ex-US Olympians on the Whalers roster (Minnesotans Timothy Sheehy and Tommy Williams) had spent a significant part of their careers in Boston with Boston College and the Bruins, respectively. The Whalers would have the WHA's best regular-season record in the 1972–73 WHA season, with Webster leading the team in scoring and rampaging through the playoffs, and b~ehind legendary ex-Boston University coach Jack Kelley, would defeat the Winnipeg Jets to win the inaugural Avco World Trophy, the WHA championship.

While in Boston, the club played their home games at the Boston Arena and Boston Garden. However game scheduling at Boston Garden (owned by the rival NHL Bruins) became increasingly difficult, and the owners decided to relocate the team to Hartford, Connecticut beginning with the 1974-75 season. The area, aside from various minor league teams in New Haven, had been largely bereft of pro hockey until the team's arrival. While waiting for their new arena in Hartford, the Whalers played the first part of the 1974-75 season at The Big E Coliseum in West Springfield, MA. On January 11, 1975, the team played its first game in front of a sellout crowd at the Hartford Civic Center Coliseum.

The franchise remained in Hartford until it relocated to North Carolina for the 1997-98 season, save for a temporary relocation to the nearby Springfield Civic Center in the late 1970s while their Hartford arena was being rebuilt after heavy snow followed by heavy rain caused the roof to collapse, which suffered from several engineering and construction shortcomings (See Hartford Civic Center Arena Roof Collapse). Though they never again won the league championship, the New England Whalers were a successful team, never missing the playoffs in the WHA's history, and finishing first in its division three times.

They had a more stable roster than most WHA teams—Ley, Webster, Selwood, Pleau, and Tommy Earl would all play over 350 games with the club—and scored a major coup when they signed legend Gordie Howe and his sons Mark and Marty from the Houston Aeros in 1977. While the first two full seasons in Hartford were not glittering (the Whalers recorded losing records both years), the final two WHA seasons saw more success. They went to the finals again in 1978, with a veteran team spearheaded by the Howes—50-year-old Gordie led the team in scoring—future NHL stars Gordie Roberts and Mike Rogers, All-Star defenseman Ron Plumb, and forwards John McKenzie, Dave Keon and Mike Antonovich, and possessed of the league's best defense. The next season was not so fine, but while age finally caught up with Gordie Howe, the slack was picked up by Andre Lacroix, the WHA's all time leading scorer, acquired from the Aeros.

As the New England Whalers were one of the most stable WHA teams, it was one of the four franchises admitted to the National Hockey League when the rival leagues merged in 1979. Following lobbying from the Boston Bruins, one of the conditions of the merger stipulated that the Whalers were to drop "New England" from their name. The Howes, Rogers, Ley, Keon, Smith, Roberts and Lacroix would go on to wear the uniform of the Hartford Whalers. The team also changed its colors to blue and green, a combination which was unused in the NHL at the time. Unlike the other former WHA teams, the Whalers were not stripped of most of their players. Only Selwood, George Lyle and Warren Miller were reclaimed by their former NHL teams. 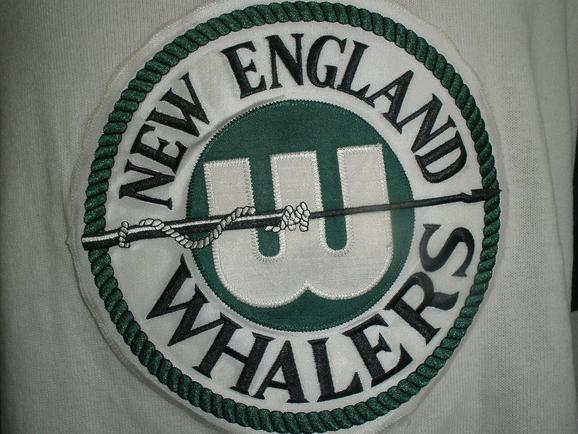 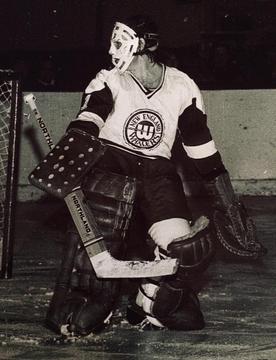 The Formation of the WHA, the Early Years

has recreated the original crest 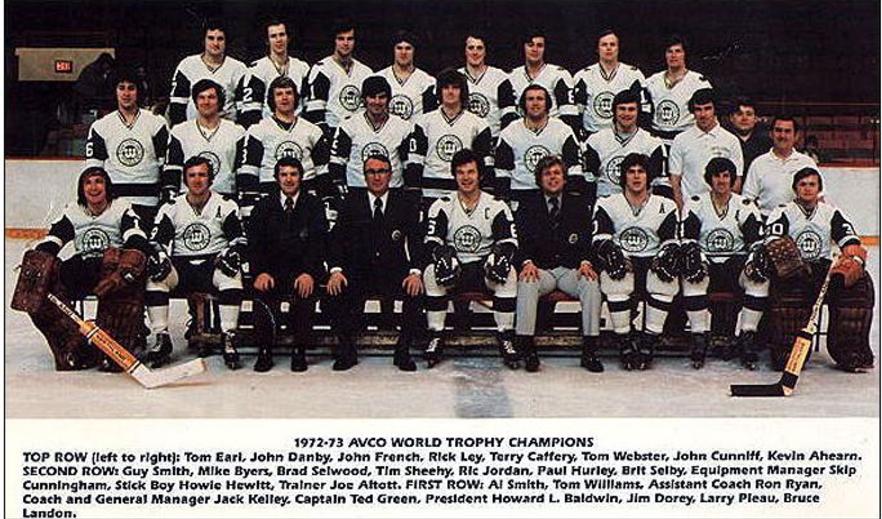 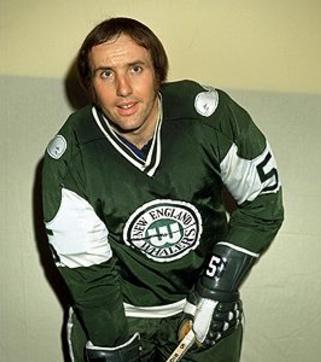