History of Ice Hockey in Galt:

The history of hockey in Canada dates back to 1860’s. In 1890, the Ontario Hockey Association was formed to provide a platform for the hockey players and teams in that area. The very first professional Galt hockey team was established in 1891 to become a member of the Ontario Hockey Association. As the years passed by, many professional as well as amateur teams formed in Galt and it became a hotbed for sports and recreation. Although, there was much support and assistance for the teams out there in Galt, still it was not an easy task to keep up the performance of any team at different levels and different seasons. For this reason, the Galt teams had no representation at the OHA Senior Association.

It was in June 1959, when the Arena manager of Galt, Len Gaudette, took an important decision. He organized the hockey team of the Galt players to represent themselves as the Galt Terriers at the OHA Senior Hockey League. The Galt Terriers was placed in the Senior B loop in the 1959/60 season. Having their performance improved a lot, they got a place in the Senior A pool in the next season.

Hall of Fame as the Galt Terriers

As the Galt Terriers began to achieve a good position in Senior A levels, the manager of the team made some major changes to strengthen the position of the team further. He contacted the players of the Kitchener Dutchmen who had already left the team. Since by that time, the Galt Terriers had got some good name in Ice Hockey, many players like Floyd Butch Martin, Bob McKnight, Harold Boat Hurley, Darryl Sly, Ted Maki and Bill Wiggie Wylie agreed to sign up with the manager. Later on, many other players got motivated and made agreements to join the team. Soon the Galt Terriers contained legendary players like Joe Hogan, Ab Martin, Frankie Carroll, John Reinhardt, Harry Neale, Pete Kowalchuk, Bobby Mader, and Alec Butch Keeling. Due to the talent and sportsman spirit, the team got so well in the ground that they won the Allan Cup championship in 1961. This was a great achievement for the Galt Terriers and it opened the door to series of triumphs for them.

As the champion of Allan Cup, the Galt Terriers got the chance to represent Canada in the upcoming World Hockey Championship. In 1962, the World Hockey Championship was held in Colorado, where the Galt Terriers showed record performance and won 6 matches out of 7 to acquire the silver medal as the runner up team. They lost their only match against the Sweden team, which was the most powerful and successful team in the tournament.

The manager and the players had worked diligently to achieve this position, however the players could not maintain their level of performance in the upcoming years and could not secure even the third place in the next hockey league season. The down fall of the Galt Terriers, made the officials to announce in 1963, that the Galt Terriers might cease their participation in the upcoming events.

Hall of Fame as the Galt Hornets

The Galt Terriers organizers, however, did not give up on their efforts for the Galt ice hockey team. Later in September 1963, they announced the commencement of the Galt Hornets in the OHA Senior A Hockey League in place of the Galt Terriers. They also commenced Share-the-Wealth Scheme for equal shares of the members in the operations profits. This scheme worked wonder and the players put more hard work to their performance in the upcoming events. The Galt Hornets became one of the most successful and powerful amateur teams in Canada.

With their strength and immense talent, the Hornets tied for the first position in the next seasonof the Hockey League. Although, they could not advance further in the playoffs after that tournament yet their performance was reckon for other teams. They improved year by year and in the 1968/69 season, they were able to compete with the Clgary Stampeders in the final match of Allan Cup of the season and came out victorious. It was the time, when the Galt Hornets were able to bring the Allan Cup back to Galt after so many years.

After winning the Allan Cup, the Galt Hornets got the chance to attend the 8 game exhibition tour which held in Germany. It was a great opportunity for them to show a record a performance scoring 4-3-1 in the tournament.

This motivated the players a lot and they showed the same performance in the Allan Cup in the 1970/71 season. They again defeated the Calgary Stampeders in the finals to claim the Allan Cup. After that they represented Canada in the Europeon Ahearne Cup Tournament which held in Sweden and claimed fourth position scoring 4-3 in the tournament.

Although, the Hornets could not become victorious in the next Allan Cup tournament, yet they kept on participating in the international events. In 1972, they competed the strong club teams like Russia and Czechoslovakia in the Royal Bank International Tournament and claimed the third position overall. In 1974, the Hornets claimed 2nd position in the CCM International Hockey tournament after competing Russian team in the final. In the 1975/76 season, they were victorious against Oklahoma farm club from maple leaf and claimed the Russian first division Khimik in the exhibition play.

In 1980 the Hornets won the Eastern Canadian Championship and was named the Cambridge team of the year. Their success continued into the 1982/83 season when the team once again captured the Allan Cup defeating the St Boniface Mohawks. As a result of this win the Hornets travelled to Japan in February 1984 for a ten day, five game exhibition tour. That same year the club repeated as the Senior “A” Champions of Eastern Canada but were unable to repeat as Allan Cup winners, losing in the final series in Thunder Bay.

The club folded in 1987 only because the league in which they were playing ceased operations and there was no where else for them to play.

THE HISTORY OF THE GALT HORNETS

Let us have a look at all the ups and downs of this great ice hockey team right from the beginning. The Cambridge Hornets as former Galt Terriers

As stated earlier, the Hornets started their career as the Galt Terriers from the platform of OHA Senior A Hockey League. The Galt Terriers were the champions of Allan Cup in 1961 in their very first season.  Following this victory, the Terriers participated in the Ice Hockey World Championship in the next year and represented Canada at the event. They were victorious to 2nd place in that tournament and won the silver medal for it. The notable players which participated in that tournament on behalf of Galt Terriers, included Darryl Sly, Dave Dryden, Bill Wylie and Tod Sloan.

After claiming victories in the Allan Cup and the Hockey World Championship, the Galt Terriers renamed themselves as Galt Hornets. This team claimed more victories in the upcoming years. It won Allan Cup twice in the seasons of 1969 and 1971.

In 1973, when the Galt city was merged into the Cambridge city, the Galt Hornets also decided to change their name to Cambridge Hornets. 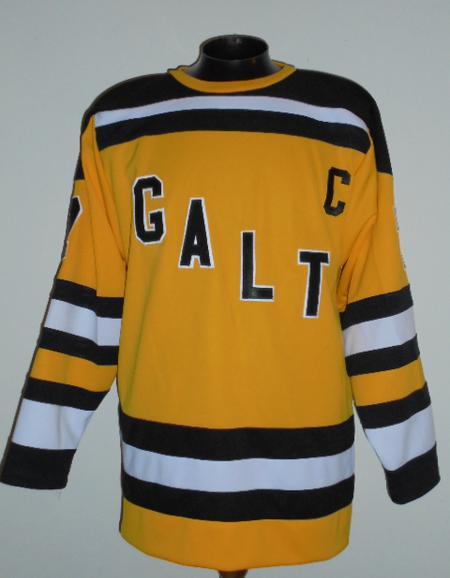 The front letters are sewn on twill. The price includes numbers. 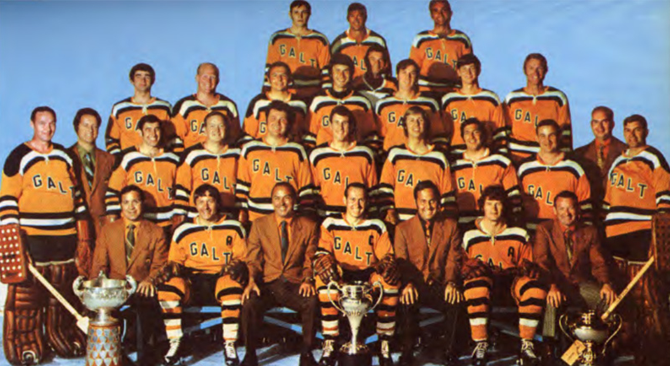 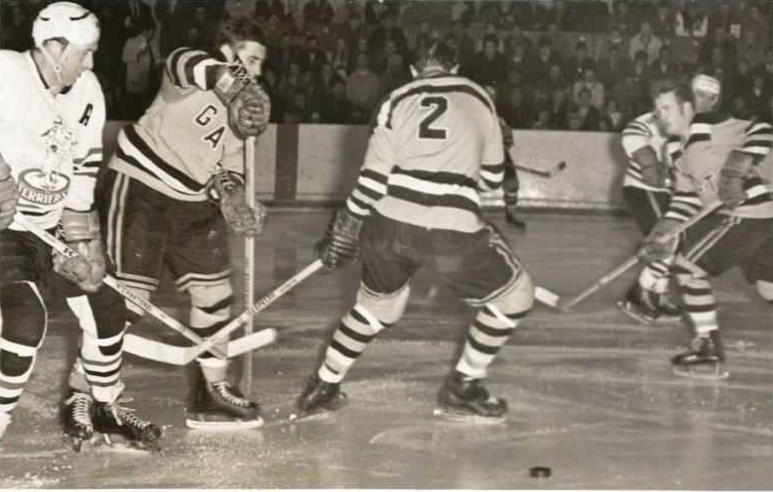 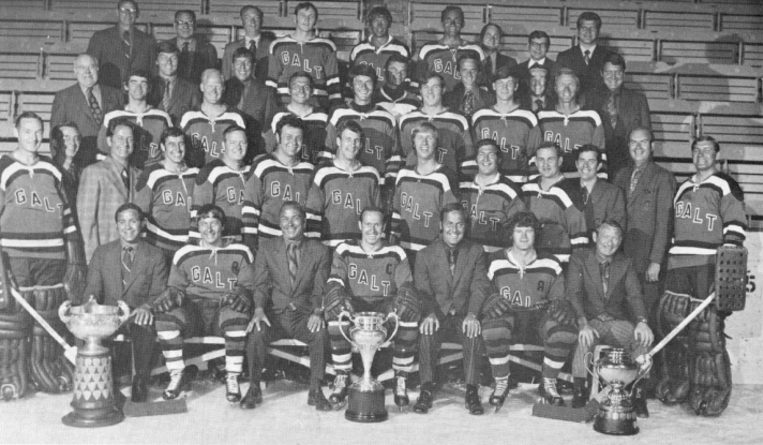