Made from heavy game weight double knit fabric with double elbows, double shoulders and 1990's style snap fight straps. This jersey is made by a former manufacturer of pro jerseys

worn in the national, american and international leagues and represents the finest quality available in the industry. The front logo is combined twill and embroidery and all cresting is                                 done by the same company that crested the original teams jerseys. Name and numbers added are $50.00 extra. 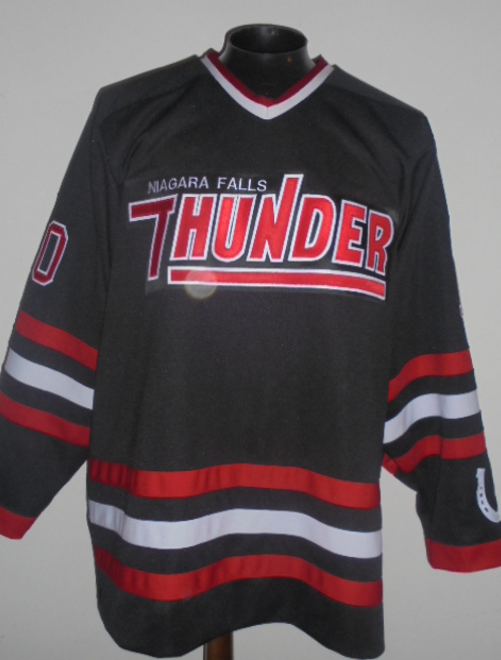 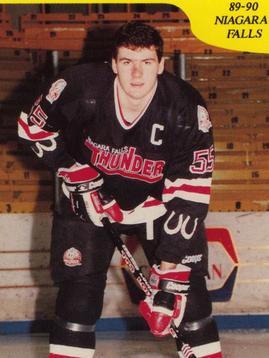 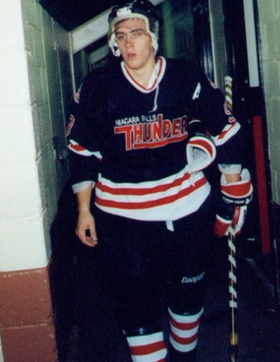 The History of the Niagara Falls Thunder

The Thunder picked up on the winning note of the Steelhawks' last season in Hamilton. Coach Bill LaForge returned with a strong core of players that lead the team to a second-place finish in 1988–89. Niagara Falls reached the OHL finals the first year in their new home city, losing to the Peterborough Petes.

Many players graduated from the OHL after that season and the Thunder began to rebuild for 1989–90. Shortly into the season, growing tensions between team owner Rick Gay and coach Bill LaForge led to the coach being fired. LaForge was never forgiven by the fans for perhaps costing the team a chance of the Memorial Cup in 1989.

The Thunder hired the younger and up-and-coming Oshawa Generals' assistant coach George Burnett to take over. The team rallied from out of the playoffs to 6th place. Niagara Falls continued its momentum into the third round of the playoffs knocking off the first place London Knights before losing to the Kitchener Rangers.

The Thunder finished the next two seasons in second place, and made it to the third round of the playoffs both years, a feat they managed four years in a row. Coach Burnett was voted Coach of the Year for 1990–91 and 1991–92. Both years their playoff nemesis, the Soo Greyhounds, eliminated them in the semi-finals.

Many players graduated in 1992 for professional careers, and Coach Burnett was promoted to the Cape Breton Oilers of the AHL. He won the Calder Cup with the team in 1992–93.

The team never regained its strength of the first four seasons. After three poor seasons on the ice from 1992–93 to 1994–95, game attendance was dropping. This, combined with rescheduling of Sunday games to Saturday nights, and an aging arena with no new arena deal in sight, resulted in the Thunder moving to Erie, Pennsylvania to play as the Otters. 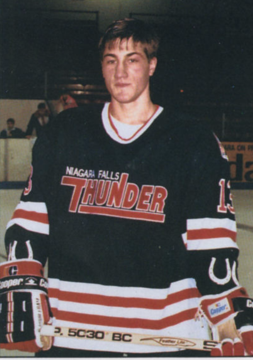