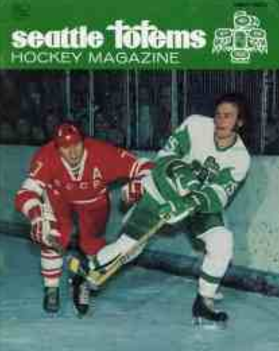 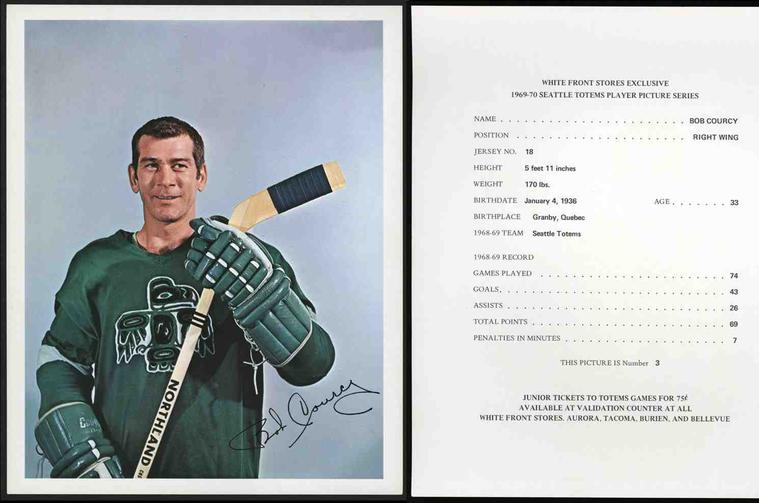 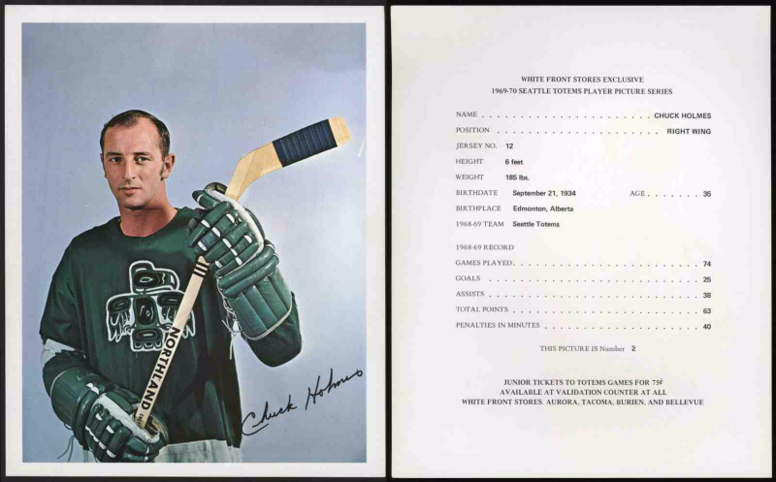 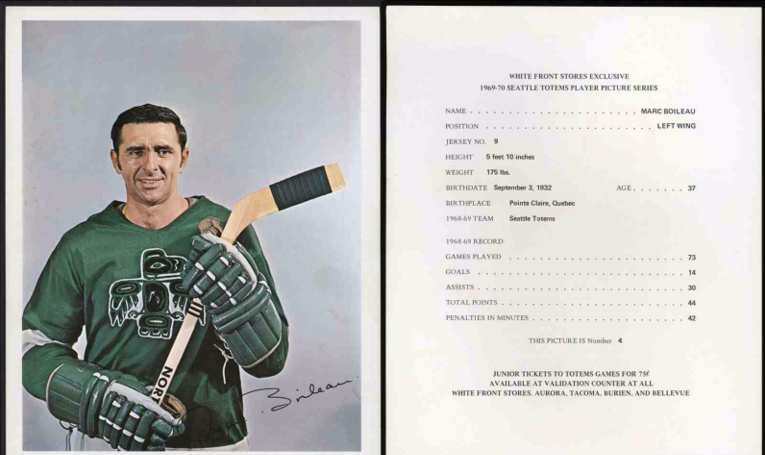 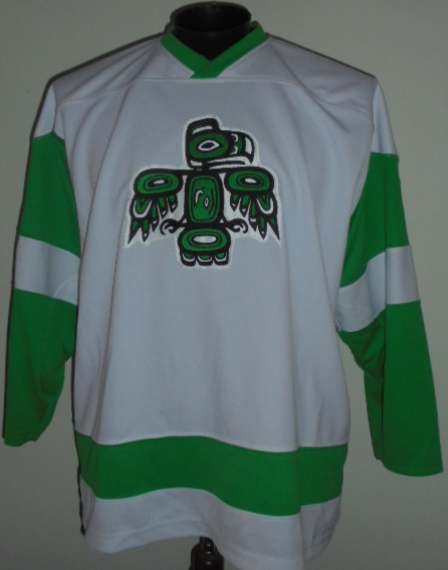 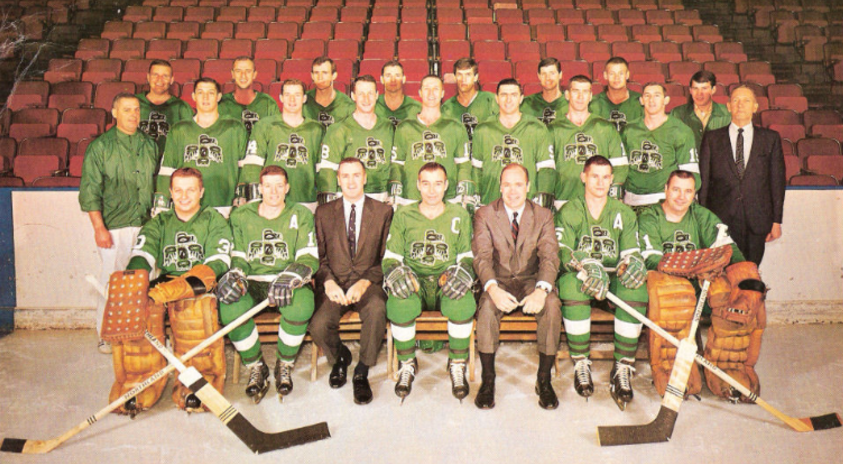 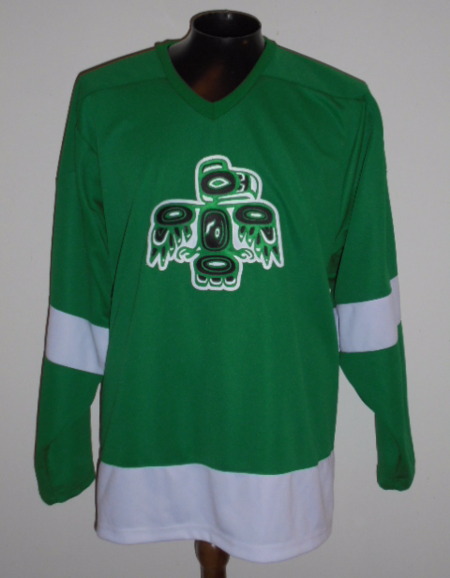 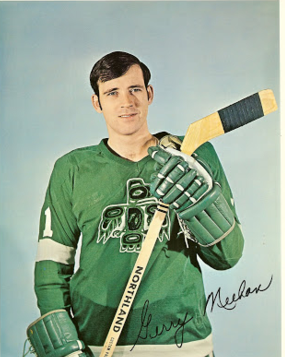 The Seattle Totems were a professional ice hockey franchise in Seattle, Washington. Under several names, the franchise was a member of the Pacific Coast Hockey League (renamed the Western Hockey League in 1952) between 1944 and 1974. In their last season of existence, the Totems played in the Central Hockey League (1963–1984) in the 1974-75 season. They played their home games in the Civic Ice Arena and later at the Seattle Center Coliseum. The Totems won three WHL Lester Patrick Cup championships in 1959, 1967 and 1968. The Totems were one of the few American-based professional clubs to play the famed Soviet Red Army team. On December 25, 1972 the Totems lost to the Soviets 9-4. A rematch between the two clubs was held on January 4, 1974. Led by Don Westbrooke's three goals the Totems won the game 8-4. Seattle Totems vintage hockey jersey

After World War II, the Pacific Coast Hockey League, a major professional league on the west coast in the teens and 1920s, was resurrected as a semi-professional loop. Seattle, as a strong hockey town and notable for being the first city outside of Canada to host a Stanley Cup champion (the 1917 Seattle Metropolitans), was granted a franchise, the Seattle Ironmen. The Ironmen had modest success, finishing in first place in the league in 1948, while the league itself became fully professional in 1949. Its most notable stars were Gordon Kerr, the team's leading scorer in those years with 235 points in 244 games, William Robinson, Eddie Dartnell and Joe Bell. Among other notables for the team were future NHL star goaltender Al Rollins and legendary Philadelphia Flyers coach Fred Shero.

The team rejoined the WHL as the Americans the following season, finishing in first place in 1957 led by a tremendous season by Fielder, who broke the professional single season scoring record with 122 points en route to Most Valuable Player honors and the first of four straight scoring championships for Seattle. Among other notables for the Americans were Val Fonteyne, notable as the least penalized player of all time, future Vezina winner Charlie Hodge, and future National Hockey League general managers Emile Francis and Keith Allen. The team's final season as the Americans, in 1958, saw the first time the franchise would win a playoff series

The Americans were renamed the Seattle Totems for the 1958-59 season, the name by which it would go for the rest of its existence. Fielder and Filion remained the team's great stars, but like many other WHL teams the Totems had very stable rosters, and players such as Marc Boileau, Gerry Leonard, Bill MacFarland, Jim Powers, Gordie Sinclair and future NHL coach and general manager Tom McVie spent many seasons each in Seattle colors. Allen was the team's coach its first seven seasons as the Totems, guiding the team to a first place finish in 1959 and to the playoffs six out of the seven years of his tenure.

Seattles NHL franchise that almost was

On June 12, 1974, the NHL announced that a Seattle group headed by Vince Abbey had been awarded an expansion team to begin play in the 1976-77 season. A $180,000 deposit was due by the end of 1975 and the total franchise fee was $6 million. In addition, Abbey had to buy the shares in the Totems held by the Vancouver Canucks, who were using the minor-league Totems as a farm club. The expansion announcement also included a franchise for Denver, and with the loss of two more of its major markets, the WHL announced on the same day that it was folding.

The Totems joined the Central Hockey League for 1974-75. After missing a number of deadlines while scrambling to secure financing, the NHL threatened to pull the franchise as there were a number of other suitors in the wings. Abbey allegedly passed on an opportunity to purchase a WHA team for $2 million during this period, and he missed an opportunity to acquire an existing franchise when the Pittsburgh Penguins were sold in a bankruptcy auction for $4.4 million in June 1975. The Totems folded following the 1974-75 CHL season, and that summer the NHL pulled the expansion franchise from Seattle as well, leaving the city without hockey for the first time in two decades. Abbey filed suit against the NHL and the Canucks for anti-trust violations that he alleged prevented him from acquiring a team; it was finally settled in favor of the NHL in 1986.

is a Coast Salish design and is rendered here with a fully embroidered logo just like the originals. Price includes a one color number.