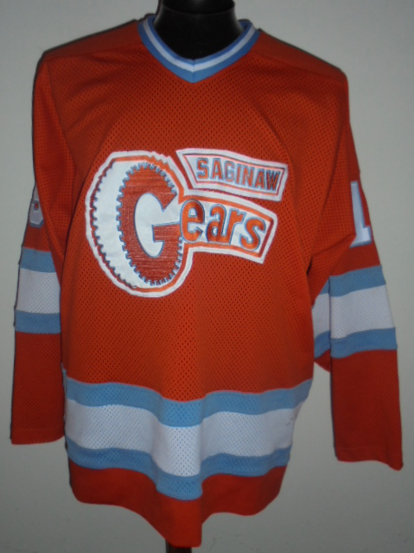 Legacy of the Saginaw Gears

The Saginaw Gears were a minor-league ice hockey franchise that played in the defunct International Hockey League (IHL). The Gears existed from 1972 to 1983. The Gears played their home games at Wendler Arena in the Saginaw Civic Center (now known as The Dow Event Center).

IHL hockey would later return to the Tri-Cities when the Flint Generals were moved to Saginaw, Michigan to become the Saginaw Generals for the 1985–86 season.

The Gears made the playoffs for nine straight seasons, from 1973–82. The Gears reached the Turner Cup Finals five times in that stretch, and won the championships in 1977 and 1981.

The 1976-77 Saginaw Gears hockey team had it all with strong goaltending, physical defensemen and dynamic scorers on a club laden with veterans.

Saginaw knew it has something special from the outset and carried it through the regular season and to the final game of the playoffs where the Gears defeated Toledo to win the Turner Cup title.

They're the first professional sports team to join the Saginaw Country Sports Hall of Fame as a member of the 2014 induction class.

That 1976-77 was just the fifth year of existence for the Gears, but it turned out to be one of their most memorable.

During the regular season, Saginaw went 40-27-11 to win the Fred A. Huber Trophy, awarded annually by the International Hockey League to the North American hockey team with the most points. Of course, the Gears felt the most comfortable at home  where they went 27-8-4.

"There was no doubt that we had the best fans in the whole International Hockey League," Westner said. "We had a real good following. We were pretty well sold out most games. For the most part, there were 5,000 fans there and they backed us every night."

Of course, they had a lot to cheer for watching a Gears team that set records for most goals in a period with eight and most power play goals in a season with 67. Saginaw even set a record by scoring two goals in two seconds one time. They scored, won the face-off and blasted a slapshot from the blueline for a second goal.

Mario Lessard provided Saginaw's presence between the pipes finishing the season with a 3.47 goals-against average.

The group was coached by Don Perry.

"He was the type of coach that if you didn't play his style of hockey, you didn't stay around in Saginaw very long," Westner said. "He knew how to get the most out of his players and who worked well together."

That formula worked throughout the regular season until the first round of the playoffs where the Gears faced their first bit of adversity against Muskegon. Saginaw fell down 3-1 in the series and had to fight back for the series win in seven games. They rebounded to down Kalamazoo in five games in the second round before needing seven games to knock off Toledo and claim the title.

"Anything can happen in a Game 7, but we were confident in that game," Westner said. "We were up 1-0 after two periods, and we just said we had to go out there in the third and make it happen."

The Gears sent several players to the National Hockey League in their 11-year existence. The biggest names include:

Lou Franceschetti
Bob Froese
Greg Hotham, whose sons Scott and Andrew played for the Saginaw Spirit
Mario Lessard
Mike Palmateer
In 1974–75, longtime NHL forward/defenceman Reg Fleming joined the Gears in time for the 1975 playoffs.
Head Coach Don Perry also made it to the NHL, coaching the Los Angeles Kings from 1981–84. 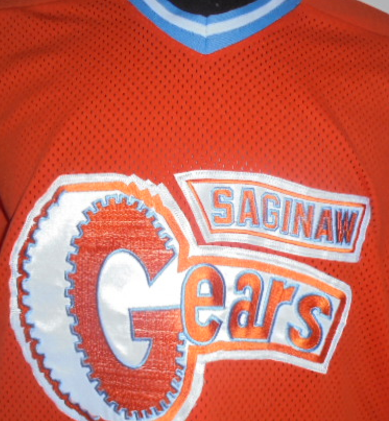 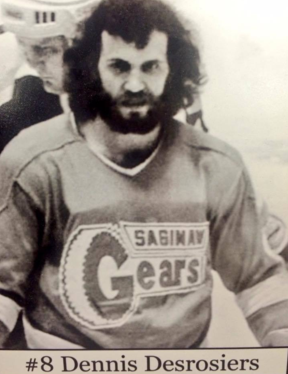 As told to: Rick Shanley

We were in Muskegon and I’d gotten into it with Carlo Torresan earlier in the game, probably first or early second period. He was big and strong, overpowering– hard to fight– but I wasn’t going to step away. Honestly, I lost quite handedly. I remember that they got us separated and took us to the box, where we kept antagonizing each other. They got me into the box first – probably because I was more willing on that particular occasion – and he came by the box. I said something, I don’t remember what it was, but he went absolutely bonkers and got thrown out of the game. All was moving along rather smooth until later on there was a fight going on. I got hooked up with one of the guys who didn’t fight much; I just grabbed the guy and he wasn’t too interested, wasn’t a big combatant, and I was watching another teammate fight somebody.

When you’re in the middle of a brawl and the place erupts, you don’t know what’s going on: you’re not looking for a guy in street clothes on the ice.

All of a sudden, the guy I was standing there holding says, “Please don’t hit me.” Had he not said anything, it would’ve been fine. But it just struck me wrong. Especially because I just finished getting the living crap beat out of me by the friggin’ gorilla. The way he said it struck me as wrong. I just started peeling him. It was in the playoffs, so it was time to make something happen, and I just started giving it to him. The benches emptied. Torresan, in street clothes, came out of the Zamboni alley and the place erupted. I was between the blue line and the center ice line on the visitor’s bench side. When you’re in the middle of a brawl and the place erupts, you don’t know what’s going on: you’re not looking for a guy in street clothes on the ice.

I turned around and saw Torresan running out. The dress of the day was one of those flowered, open-neck silk shirts and a choker around the neck. He was right in style. When I saw him my eyes got as big as saucers. Here was the opportunity I was waiting for. A guy in street clothes is no competition, but just as I turned to approach him, Mario Lessard–our goalie who ended up playing for the Los Angeles Kings– came flying by and jumped on Torresan. He jumped so high his butt-end hit me in the shoulder.

THE BLUE MONSTERS BACK NINE

I was with Lindy Ruff, Rich Kromm and John Vanbiesbrouck for training camp. We played nine holes of golf at Doral, the Blue Monster, then stopped to get a bite to eat. Because training camp ended by 2 p.m, there was plenty of time to play golf. The course was a maze of paths: yellow, gold, and silver. We’d stop for a burger and, on the back nine, get turned around and end up on the wrong nine.

We’d see a guy and a female assistant dressed in a chef’s hat and cooking on an outdoor grill for an outing on another course. So we’d pull up and say,“Excuse  me, can you tell us how to get to the back nine of the Blue Monster?”

The guy looks up and asks me: “Aren’t you Dennis Desrosiers?” I was startled. I said, “Yes.” This guy starts telling everyone, “This is the greatest hockey player! This is my wife, we’re from Saginaw, and we used to watch him play and he is the greatest hockey player!” I can’t think of a time when I was more embarrassed: having a chef say in front of a bunch of NHLers that I was the best player he’d ever seen when I never even played in an NHL game. If only I’d been with a bunch of real estate agents. 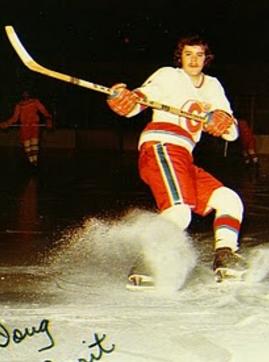 Made from heavy game weight double knit or mesh fabric with double elbows, double shoulders and fight straps and a beautiful embroidered front logo. This jersey is made by a former manufacturer of pro

jerseys worn in the national,   american and international leagues and represents the finest quality in the industry. For questions or ordering use the CONTACT or ORDERING buttons on the left or telephone 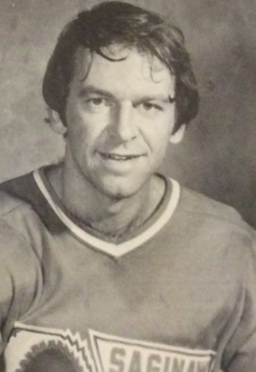