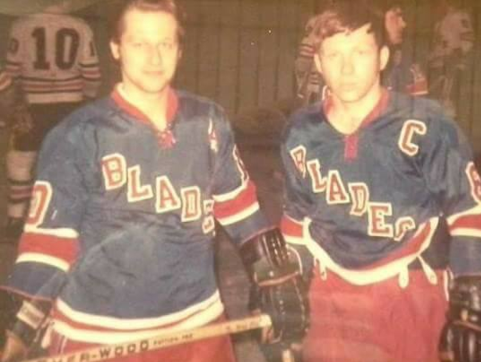 Made from heavy game weight double knit fabric with double elbows, double shoulders and fight straps. This jersey is made by a former manufacturer of pro jerseys worn in the national, national, american and international leagues and represents the finest quality in the industry. For questions or ordering use the CONTACT or ORDERING buttons on the left or telephone us at 716-602-4787

The legacy of the New Haven Blades

By the 1950s, professional hockey had long been one of the top forms of entertainment in New Haven. The Podoloff family built the Arena in 1927 with hockey in mind, and the old building played host to a plethora of teams through the Depression and World War II.

But it was the formation of the New Haven Blades in 1954 that signified the golden age of hockey in the city. Games in the rough-and-tumble Eastern Hockey League were action-packed, fights often outnumbering goals.

​personalities. The players, treated like family, returned the love to both the city and its hockey fans.

Many Blades came here from Canada, yet remained in the area after retirement to work and raise their own families.

Don Perry would become the face of the Blades, arriving in the midst of the inaugural season and immediately winning over the fans. He spent a total of 12 seasons in New Haven, winning a league championship as a player-coach in 1956.

Perry coached the Blades through their final season in 1972, and then came back to coach the New Haven Nighthawks in 1981, a year before being named coach of the Los Angeles Kings.

As a player, Perry was coldblooded and merciless. As a coach, he was equally uncompromising. The Blades took on his personality. Games occasionally teetered on chaos. New Haven fans lapped in the excitement.

"I remember the first time my father came down from Canada to see me play," former Blade Dave Hrechkosy told the Register in 1979. "There was a bench-clearing brawl. The New Haven fans were tearing down the wire screens and wouldn't let the opposing players return to their bench. I had a fight with Dennis Desrosiers and then I went after Pat Kelly, their coach. That's when the police arrived, complete with helmets, sticks and riot dogs. My father was petrified. He couldn't believe his eyes. He went back home and never returned."

Fights on the ice were like something straight from the script of "Slap Shot," the iconic hockey flick that would be filmed years later. Fact is some of the movie's fight scenes were based on actual incidents from Blades games.

Syracuse's Ray Schultz, brother of famed Philadelphia Flyers enforcer Dave Schultz, had been bullying the Blades for much of the 1972 season. Mike McNiven, a muscleman, was handpicked by Perry off another team's roster solely to get even with Schultz.

In his first game as a Blade, McNiven initiated a brawl just as the puck dropped for the opening faceoff. He lifted Schultz and dropped him on his head. Schultz, realizing McNiven was too tough for him to handle, snapped his stick in two and wielded it like a sword. McNiven, undaunted, also used his stick and the two went at it at center ice.

The Blades went on to win the game 7-1. Syracuse, and more importantly Schultz, were humiliated. McNiven became a sort of cult hero. Former Register sports writer Paul Marslano wrote that Billy Cal, owner of the Arena Grille, presented McNiven with the reward of a free postgame drink and medium-rare steak. It was consumed in the restaurant with a cheering crowd in the background.

By March 1972, the Blades were winding down their 19-year run in the city. The Arena was scheduled for demolition; the New Haven Coliseum was near completion. A new team, the Nighthawks, would be the tenants. The American League Hockey was a developmental league. Play was more polished; referees not of the hometown variety; players unlikely to attempt to impale each other with broken sticks.

It was the end of an era, in more ways than one.

"I never experienced anything like it since I left New Haven," Perry told Marslano in 1979. "Now, it's like a business. When I was in New Haven, the players and fans were like my family. Our rowdy bunch helped make us a winner. They were worth their weight in gold.

"We never lost more than a couple of games a year at the Arena, and the fans showed us their appreciation. I can't tell you how many times I think back to those days and wish we could all be together again." 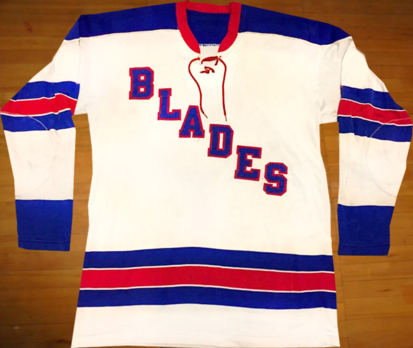 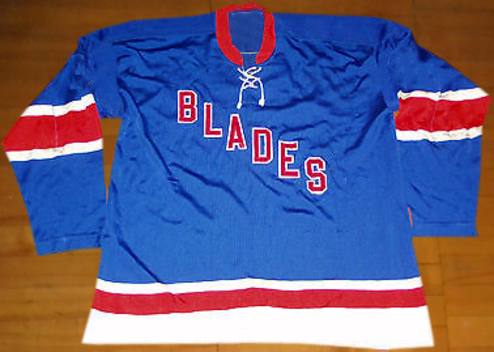