When two Kingston hockey stars were killed in action in the First World War, their former coach Capt. James T. Sutherland was grief stricken and wanted to commemorate their sacrifice. Shortly after the war ended in 1918, his idea for what would become the Memorial Cup was accepted unanimously by the Ontario Hockey Association.

Don Cherry just shakes his head when he hears young players today calling it the Mem Cup. “It’s the Memorial Cup and the reason we play hockey for it is to honour our fallen soldiers,” he insists, his voice booming over the phone from his home in Mississauga.

The Kingston-born hockey commentator and military booster says the Memorial Cup is the toughest trophy in hockey to win, more challenging than the Stanley Cup.
“While NHL teams can build for years, with the Memorial Cup you only have three years of eligibility as a junior and then you are out,” he says. A total of 60 teams in nine provinces and four American states compete for the Memorial Cup.

Cherry should know. Back in 1953, he was a 19-year-old defenceman with the Barrie Flyers (in middle in photo) when the team defeated all challengers to win the trophy.

“Coach Hap Emms put together the best team money could buy,” he recalls with a laugh. After stocking up with top players from across the province, the club won the Ontario Hockey Association championship. They then traveled to Quebec to play the Citadelles, winning the George Richardson Memorial Trophy as top team in Eastern Canada and earning a berth in the Cup finals in Manitoba.

Barrie cruised to victory over the St. Boniface Canadiens in the best of seven series, winning 4-1. After scoring just three goals in 56 games during the regular season, Cherry rose to the occasion in the Memorial Cup, getting two goals during the tournament, including one in the final game.

For the Barrie squad, everything went smoothly – except for one thing. Their sweaters were so similar to St. Boniface that game officials forced them to borrow from the Toronto Marlies. But Cherry was not irked by the change. “It didn’t matter to us. We were just happy to be in the Memorial Cup final.”

The Memorial Cup has a long and storied history. It was born in Kingston but has never been captured by a team from the Limestone City.

In the years before the war, Capt. Sutherland had coached a number of promising young Kingston players who went on to fight overseas. One of his charges was Allan (Scotty) Davidson who went on to win the Stanley Cup with the Toronto Blueshirts of the National Hockey Association in 1914. It was only his second season of pro hockey – and it would be his last.


With the outbreak of war that August, Davidson immediately volunteered and was sent overseas to the trenches in France. It was there in June 1915 – just a year after winning the Stanley Cup – that he was killed in action at the age of 23.

Capt. Sutherland was devastated. However, Davidson was not the only Kingston hockey player to fall. The son of a prominent Kingston family, Capt. George Richardson was leading a patrol in February 1916 when the Canadians were hit by machine gun fire. He died the next morning.

Capt. Sutherland served in Europe and when he returned to Kingston he vowed to remember the two hockey greats who had made the ultimate sacrifice. The Memorial Cup was born to commemorate the sacrifice of Canadian soldiers in the First World War.

It is indeed tough to win. A Kingston team has made just one trip to the Memorial Cup – in 1926.  The Kingston Combines were made up of the top players from the junior Frontenacs, Queen’s and RMC. They battled the Calgary Canadians in the final but came up short.

While a Kingston squad has not won, many local greats have their names etched on the Memorial Cup and have starred in the tournament. Three local players have scored the game-winning goal in the deciding game - Gary MacGregor, Doug Gilmour and Aaron Luchuk. Kingston's Taylor Hall remains the only player in the history of the event to be named MVP in two consecutive years. Scott Arniel won it twice in a row with Cornwall and scored a hat trick in the final game. Bob Murray became one of the youngest players to ever captain a team to a Memorial Cup crown.

Originally commemorating soldiers lost in the First World War, the Memorial Cup was rededicated in 2010 to all fallen Canadian military personnel. In a moving ceremony at CFB Shilo in Manitoba, soldiers who had just returned from fighting in Afghanistan carried the Cup.

For Don Cherry, winning the Memorial Cup was the highlight of his playing career. “When you are in junior hockey it’s like the Stanley Cup – winning it is your goal. I felt very honoured to win it.” 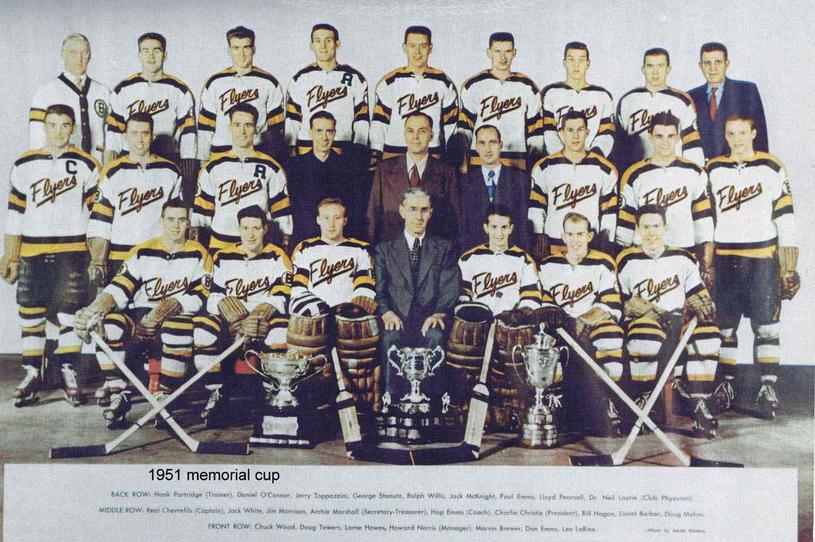 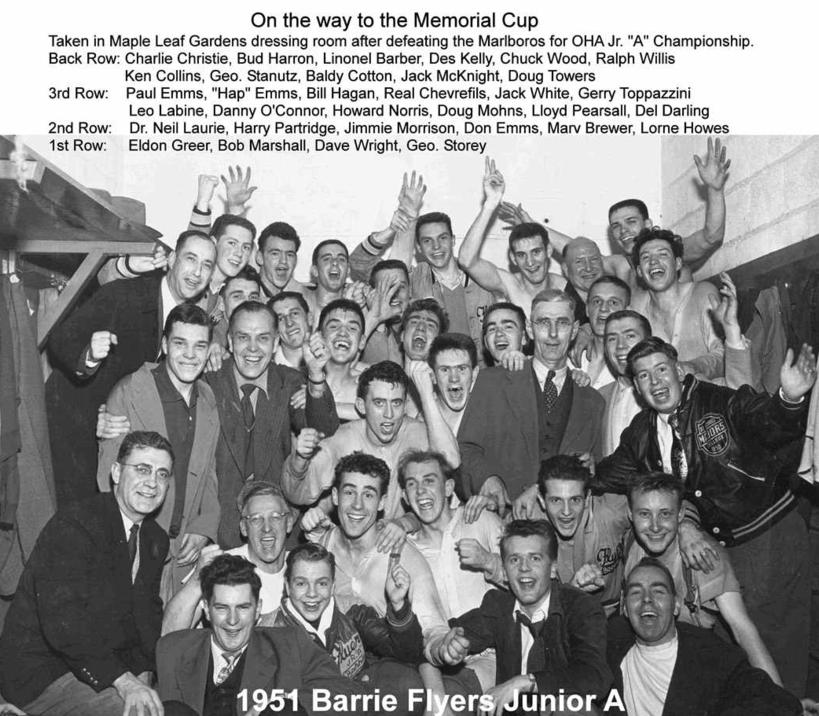 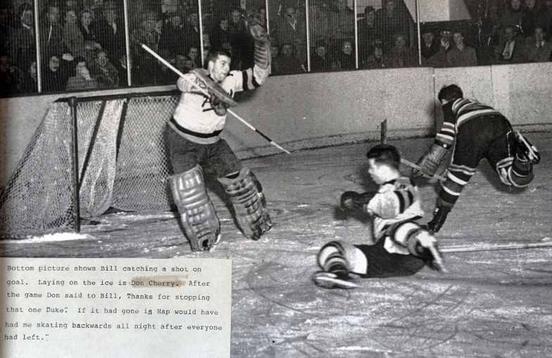 Don Cherry pictured in the middle as a member of the Barrie Flyers. The subject is presented here 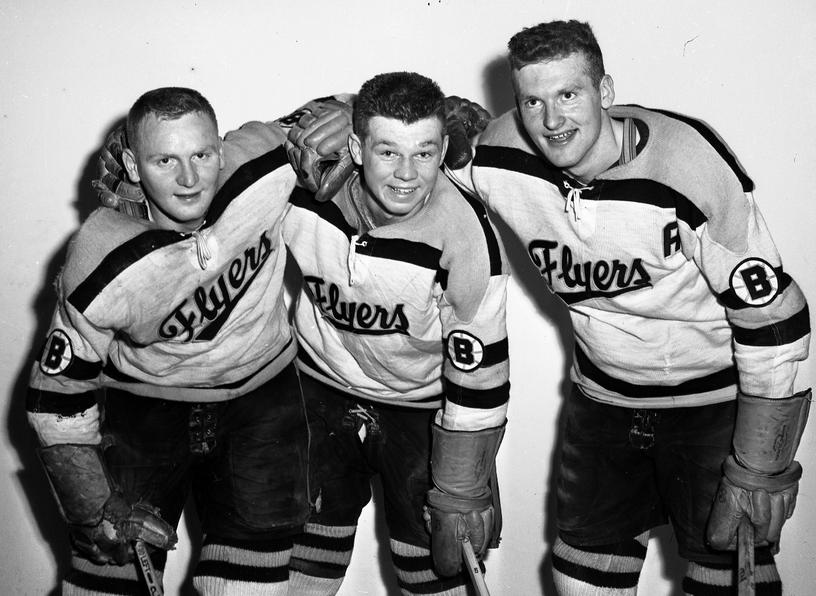 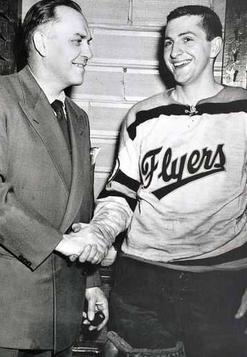 Cherry in the back row, 3rd from the right 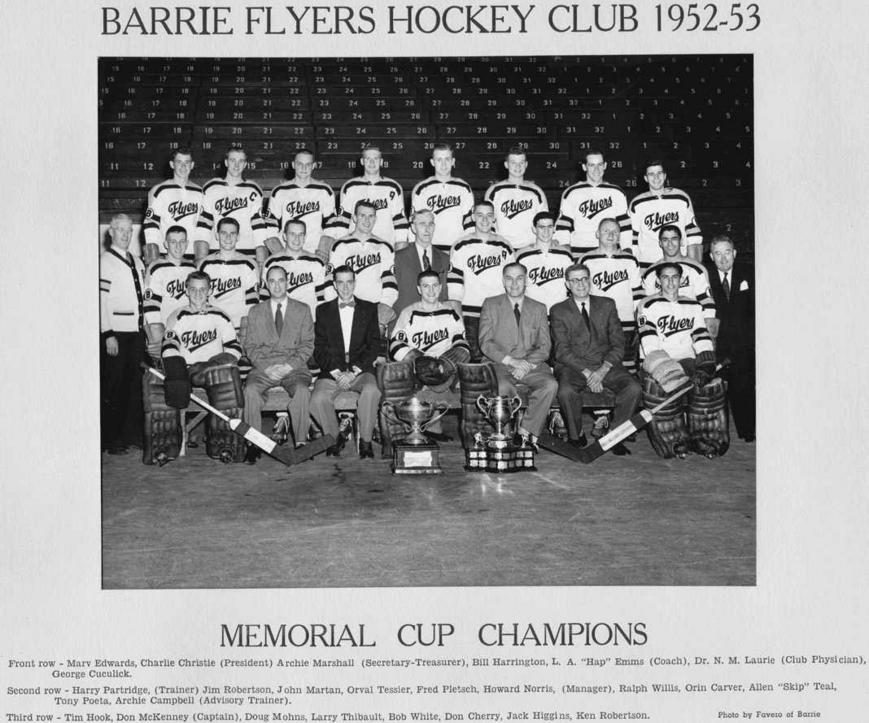 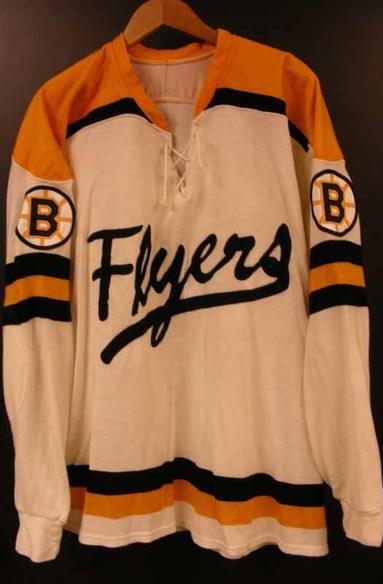 Made from heavy game weight double knit fabric with double elbows, double shoulders and 1960's style tie down fight straps. This jersey is made by a former manufacturer of pro jerseys worn in the national, american and international leagues and represents the finest quality available in the industry. The front logo features a twill logo hand cut and sewn onto the garment. Barrie won the Memorial Cup championship in 1951 and 1953 before the franchise moved to Niagara Falls and became the Niagara Falls Flyers winning two more championships in 1965 and 1967.