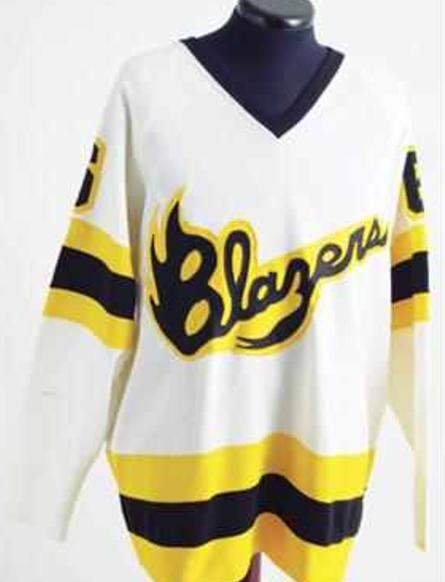 Made from heavy game weight double knit fabric with double elbows, double shoulders and 1970's style loop fight straps. This jersey is made by a former manufacturer of jerseys in the                                national, american and international leagues and represents the finest quality available in the industry. The front logo is made from twill and is sewn down onto the garment.

THE HISTORY OF THE SYRACUSE BLAZERS

The Blazers won the final Walker Cup championship of the Eastern Hockey League during the 1972–73 season, compiling a 63–9–4 regular season record and beating the Roanoke Valley Rebels 4 games to 2 in the Walker Cup finals. Ray Adduono was the leading scorer on the team (54 goals, 116 assists in 76 games) and five other players scored 100 points or more. Ron Ingram was the coach and general manager on the team.

Paul Newman's film Slap Shot was filmed in part at the Onondaga County War Memorial during the Blazers' 1976 season.